What to see in County Kerry 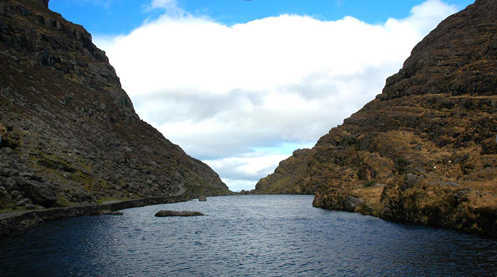 Apart from Dublin, the Ring of Kerry, in some of Ireland’s most beautiful and iconic countryside, is the country’s most visited tourist attraction.

In the far south west of Ireland, County Kerry still maintains many of the traditions of an older way of life. The Gaelic language is still strong and Kerry is a stronghold of traditional Irish sports with the most successful Gaelic Football team in the land.

We tend to think of tourism as something of a modern phenomenon, a blight even, but the natural beauty of this part of Ireland has been attracting visitors for long enough to celebrate a 250 year anniversary of its tourist industry way back in 1997.

It’s hardly surprising; the Kerry landscape takes in Ireland’s highest mountains, beautiful waters and some of the best beaches in Europe.

The Ring of Kerry has been at the heart of Kerry’s attractions since the 18th century. It’s a driving route - in the past visitors rode on horseback - around some of the best countryside in the south west of Ireland and could be seen as the perfect backdrop for a romantic weekend break.

The Ring, around 170km in length, encircles the Iveragh Peninsula, a mountainous finger sticking out into the Atlantic.

Here you’ll find MacGillycuddy's Reeks, Ireland’s highest mountains, with Carrauntoohil the nation’s highest peak soaring to over 1,000 metres. This imposing range is both an attraction for hill walkers and climbers and provides a superb backdrop for those who are happy to appreciate natural majesty from a safe distance. The Gap of Dunloe, a spectacular pass through the Reeks, is one of the best places to appreciate this majestic landscape.

The Lakes of Killarney also have a centuries old attraction. Lough Leane, Muckross Lake and Upper Lake are ringed by mountains in the Black Valley; the views are spectacular (and the local trout is just as good). The ruined abbey on Innisfallen island on Lough Leane is one of Ireland’s most important early Christian sites. Ladies View is a wonderful place to see the lakes.

The Lakes are part of the Killarney National Park which is Ireland’s oldest and has been recognised by Unesco for the importance of its ecology. The park includes the largest yew wood in Europe and Ireland’s only native herd of red deer - this native forest is how Ireland would look had man not intervened.

But man has been enjoying Kerry since Ireland was first inhabited, and the history of the area is as rich as its environment. Ancient sites include inscribed Ogham standing Stones; the Iron Age Staigue Fort; the standing stones of Lissivigeen; the rock of Skellig Michael off the Kerry coast with its abandoned monastery.

More recent history has also left its mark on Kerry. The thatched cottages of the Bog Village recreate the life on the land before the Great Famine sent so many Kerry residents fleeing to America. Derrynane House was the home of Daniel O'Connell, the Liberator, one of Ireland’s great national heroes. Ross Castle and Muckross House show the development of the Irish country seat from 16th century fort to splendid Victorian mansion.

The Ring of Kerry takes you to edge of Europe and no visit is complete without a trip to Rossbeigh - golden sands with spectacular mountains behind - which is a surfer’s dream.

Kerry is a must-visit for anyone who wants to appreciate Ireland. The Ring of Kerry has been an established tourism destination for centuries so visitors are extremely well catered for. The Kerry Way is one of Ireland’s best long distance paths; climbers and riders can enjoy some of the best experiences that the country has to offer; surfers will love the coast and anyone who enjoys unspoiled countryside, ancient and modern history; fine houses and gardens and a warm Irish welcome will find the perfect base for their discovery of this wonderful country. .


Looking for a Ring of Kerry hotel? Choose the Ard na Sidhe Country House Hotel for the ultimate luxury experience.