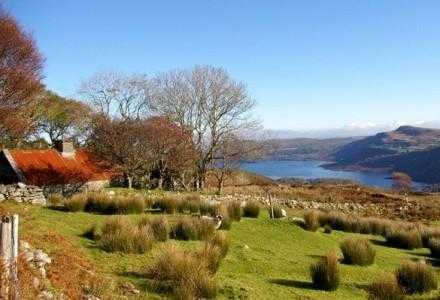 Caragh Lake is in the protected environment of Killarney National Park, considered so important that it was the first land in the Republic to be granted such status in 1932.

Set between the bustle of Killorglin and the small village of Glenbeigh, the lowering McGillicuddy Reeks – Ireland’s highest range, with Carrantuohill best seen from the lake’s western banks - form a tremendous backdrop.

Kerry is defined by its mountains and its many beautiful lakes, which make it the most, visited part of Ireland apart from Dublin.

The wonderful surroundings attracted beautiful people. Perhaps chief among them was Lady Edith Gordon, a Kerry native who determined to build her dream home on the shores of the lake. Ard na Sidhe is now a country house hotel, which has been restored to recreate Lady Edith’s vision, making it an ideal location for a walking holiday of the historic area.

The name means Hill of the Fairies in Gaelic, and Lady Edith chose an Elizabethan revival style for the ‘house of my dreams’.

The architect she commissioned to bring her dreams to life was Morley Horden, and he was responsible, in 1913, for what is now considered one of Ireland’s leading Arts and Crafts buildings.

The Arts and Crafts movement was a reaction to the rapid industrialisation of the 19th Century. Its chief thinkers – most notably, William Morris, whose wallpapers still decorate Ard na Sidhe – believed that the march of the machine was alienating people from the real joys of life. They sought to create beauty, taking their inspiration from nature and traditional craft skills. They were also politically radical, among the first socialists and dreaming of a simpler life with its roots in the pre-industrial age.

Lady Edith’s architect is something of a mystery. It is said he was chosen for the project more because of his dandyish, romantic dress rather than any great achievements. In fact, Ard na Sidhe is certainly his one great architectural work. His only other buildings of worth are a Tudor-style chapel in Cambridge, and what is now a village hall in Slip End in Bedfordshire. That building too – originally an adult education institute – was also inspired by the noble ends of the Arts and Crafts movement. A contemporary account of the opening of this idealistic institution in 1909, noted, “The building itself is a striking demonstration of what can be got from plain brick and wood when the utmost effort is spent on making the most of them.”

Lady Gordon was far from humble; she was Kerry aristocracy, a well-regarded writer, traveller and gardener in an age when women were expected to achieve little more than a good marriage.

Her autobiography, which has pride of place in the hotel’s bookshelves, tells the story of a woman looking for peace in troubled times.

A contemporary review of the book describes her birth in County Kerry as being, “In an interval between two rebellions.”

As Ireland changed, becoming an independent republic, Lady Gordon’s class lost their power to new governors. She wrote: "At any rate we went down with our backs to the wall, which had collapsed -as walls do in Ireland-long before their owners."

Although she travelled widely and was a figure on the London social scene, her heart was always in Kerry, she is said to have loved, ‘its beautiful, austere, or menacing moods'.

She also had an instinctive sympathy with the local people and mourned the disappearance of their traditional beliefs and way of life in the face of progress.

When the country did rise to win independence from the English throne, Lady Gordon was never in danger; her head gardener – with whom she regularly took her afternoon tea – was an officer in the Irish rebel army.

Her garden is still largely intact. From her travels, she brought many new species to the west of Ireland, and the rock garden she built remains a centrepiece of the modern estate.

If you are planning to visit Caragh Lake and need accommodation in Killorglin, why not book a stay at the Ard na Sidhe Country House Hotel?